‘Fire in the Hall’  - Background Information: –

'Fire in the Hall' 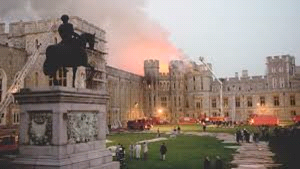 An original wooden shield for a Knight of the Garter that was once placed in St George's Hall and damaged in the ‘Great Fire’ at Windsor Castle in 1992. St George’s Hall has for centuries been the venue of many Royal Gatherings and State Banquets at Windsor. 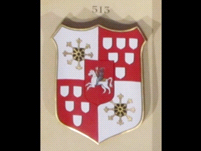 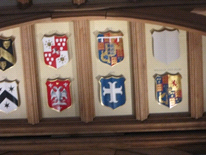 This century old fire damaged Shield recovered from St George's Hall would have had the Knight of the Garter’s Coat of Arms, paited upon the shield which was erased in the fierce fire in the Castle. 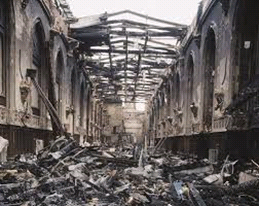 St George’s Hall before and after the Fire.

This original shield from Scots pine in six separate pieces and carefully jointed together so as to prevent distortion over the year during the natural expansion and contractions.

Ian produced from within the pine shield, a relief carving depicting a firefighter dousing the flames in Brunswick Tower which raged throughout the night in Windsor Castle. Initially the background of the finished carved shield was a bright reddish colour, but over the months and years that followed the shield has darkened somewhat. 20 inches high 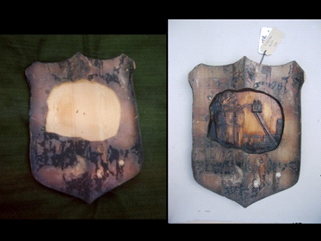 During November 1992, these images of Windsor Castle in flames were shown across the world. This shield was amongst other objects burnt in the fire rescued from a skip at Windsor Castle by a curator of a museum who was planning an exhibition about the fire at the Castle.

The Curator had been given permission to rescue a small number of the original Knights shields that once surrounded the walls and ceiling of this historic Hall, along with some old beams and plaster mouldings also damaged in the fire. These few Knights shields had been rescued from a line of skips which were placed alongside the Castle walls. They all contained the fire damaged timbers and ornate carved and gilded plaster mouldings, removed from the Castle after the fire and were all due to be buried in pits in Windsor Great Park.

Ian was later asked by the museum curator if it were possible for him to produce something from these shields which had been badly damaged in the fire. Ian later received some of these burnt wooden shields to enable him to choose the most suitable for potential carving.  The idea was to carve a scene reminiscent of one of the images that were seen at the time via newspapers and TV broadcasts throughout the world; fire-fighters pouring gallons of water onto the Brunswick Tower at Windsor Castle commissioned for the museum.

Ian carved the museums shield with a similar design of a bas-relief carving of a scene of the fire similar to the one shown here (shield #513).  This first carved shields were given to the Museum in lieu of payment and in exchange he was able to retain some of these fire damaged materials rescued from the skip including a couple of small blocks of oak timbers from the St George’s Hall along with a piece of molded plaster no longer required for the exhibition.

Ian has always rather enjoy the challenge of working from such old or damaged materials which might otherwise be disposed of, in an attempt of to create something from nothing. So once again rather than accepting a fee for such work, the ancient bartering system of simply swapping services or objects would once again come into play. In such circumstances the clients often provide the materials for free and Ian provides free labour to work on them and in exchange Ian was able to keep any of the original materials left over.

At the back of all the Garter shields were hung two small labels with a brief description to identify exactly where in the Hall the shields had originated to enable them to be returned to the prominent position they once occupied in the Hall. Shield number 513 which Ian carved this scene from the fire, was for Meinhardt Schomberg, 3rd Duke of Schomberg (1641-1719) who was made a Knight of the Garter in 1703.

The initial intention for all this material was to try and restore them and place them back into the newly restored St George’s Hall. However, it was later decided as most of these artifacts were so badly damaged in the fire, it would be far more practicable and economically to replace them all rather than restore them, so most the materials were placed into skips.

When Ian first received the shields, the pine timber was so dry it was just like trying to carve an ‘rich tea’ biscuit. He initially soaked the shields in a tub of water to try and replenish some of the moisture lost in the fierce heat but even then, nothing could be produced in too much detail as the old pine simply crumbled away even under the sharpest scalpel blade.

Sometime later Ian was asked rather than make a thousand new Garter Knights Shields required for the newly restored St George’s Hall, Ian was commissioned to make a definitive Knights shield ‘master copy’ carved from lime wood and from this original carving a flexible plaster and rubber mould was to be produced and from this mould all the future Knight of the Garter shields could be cast in a hard plaster, which would then be painted with the latest Knights Coats of Arms and placed in St George’s Hall. 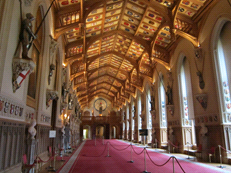 These new shields however were to be slightly smaller than the original wooden versions as can be seen in the photographs below taken in St George’s Hall Windsor.