The ‘Spirit of Britons’ sculpture Collection;

The ‘Kindred Spirits’ have been created incorporating a pair of ‘Spirit of Ecstasy’ Rolls Royce bonnet ornaments which normally takes pride of place resplendent above the ‘Rolls Royce’ trademark grill; along with the ‘Cutty Sark and HMS Victory, iconic symbols of Trade and Security, both dependant on each other 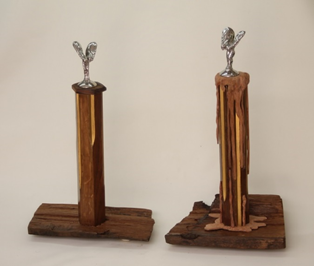 A carved section of original Scots pine removed from the Hull of the ‘Cutty Sark’ Tea clipper, depicted here filtering down the ‘candle stand’ onto a section of deck timber from HMS Victory’s. A British warship helping to keep vital sea lanes open to accommodate the requirements of nations for independent trade, and security.

The original raw materials used to create the ‘Kindred Spirits’

Windsor Castle in England is a royal residence at Windsor Berkshire. The original castle was built in the 11th century after the Norman invasion of England by William the Conqueror. Since the time of Henry I, it has been used by the reigning monarch and is the longest-occupied palace in Europe.

The castle's early 19th-century State Apartments are a superb, unrivalled sequence of rooms widely regarded as the finest and most complete expression of later Georgian style.

St Georges’ Chapel is located at the Lower Ward of the castle and built in high-medieval Gothic style. The chapel is also both a Royal Peculiar under the direct jurisdiction of the Monarch and the Chapel of the Order of the Garter. The Paschal candle is the first candle to be lit with a flame from this sacred fire, representing the light of Christ coming into the world.

HMS Victory; During 1778 -1805 Victory’s main period of activity; the 18th century Warship became the most successful First-Rate ship ever built, with both speed and maneuverability.

HMS Victory; built in England in 1765; the Flagship of Admiral Lord Nelson at the Battle of Trafalgar;, her most famous battle, where Victory had a truly International crew from over twenty different nationalities, living, working and fighting alongside each other.

‘Cutty Sark’ a British clipper ship, built in Scotland in 1869. The ship is one of the last tea clippers to be built and also one of the fastest.

Rolls-Royce; The most recognised British trademark in the world, had remained virtually unchanged for the past 92 years and the Rolls-Royce brand has been in use since 1906. From   2003 has operated from purpose-built administrative and production facilities, across from the historic Goodwood Circuit in Goodwood West Sussex, England.

Both ‘Twin Spirits’ incorporate a polished stainless-steel Rolls Royce Spirit of Ecstasy; aka The Flying Lady; a British Heritage icon. Set upon a piece of original centuries old oak timber removed from St George’s Hall after the Great Fire at the Castle in 1992.

The first of the 'Spirits' has been set upon a slice of  Windsor castle oak and then placed upon a section of Ian’s oak 'Paschal candle stand' Marquette ian initially produced, prior to his larger version commissioned for St George’s Chapel Windsor. Both ‘Spirits' were then placed upon one half of a slice of HMS Victory oak centuries old hull timber.

The second of the ‘Kindred Spirits’ has been created with the Rolls Royce ‘Spirit of Ecstasy’ placed upon an original piece of carved Scots pine from the ‘Cutty Sark’. The candle stand Marquette was then placed upon the other slice of Victory oak hull timber. Three iconic British symbols of Trade and Security working together in harmony.

Over the centuries the trade, fortitude and courage of others have filtered down to enrich us all.