The remains of St George's Hall in Windsor Castle after the fire in 1992, some of the Knights of the Garter burnt shields can be seen still attached to the wall. 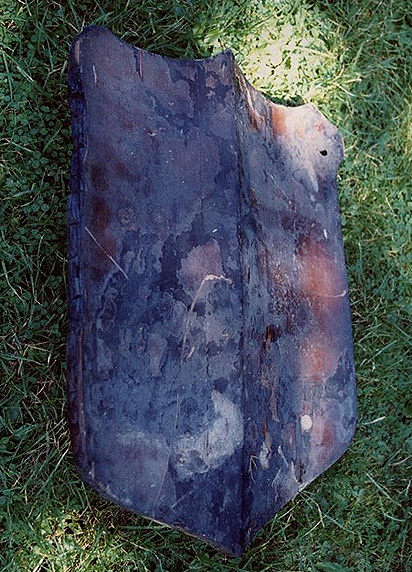 The well constructed centuries old Knights shield was originally made in six jointed pieces of pine wood to prevent any distortion during the natural  expansion and contraction in timber over the years. This original shield which was once fixed to the wall of St George's Hall survived remarkable well considering the severe condition of the fire at Windsor, although the sides of the shield still bear the burnt marks made from the intense heat. 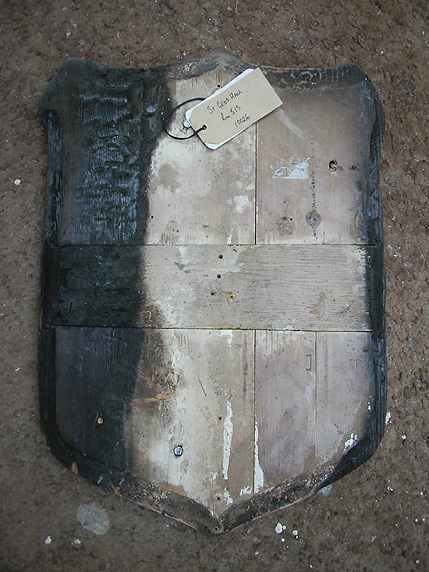 It was thought at the time, where possible those Knights shield that did survived intact from the fire or were capable of restoration were going to be returned to St George's Hall after they were fully restored, therefore labels were added to the back of the shield as soon as they were removed from the wall with its unique number written on it so that the shield could be if required, correctly returned to the exact position they once occupied in the Hall.  As this particular shield however was deemed to badly burnt to be successfully restored to its former pristine condition it was then discarded and kindly given to Ian. He later decided to try and produce a relief carving within the wooden shield, a scene reminiscent of the images that at the time was sent via newspapers and TV broadcasts throughout the world, fire-fighters pouring gallons of water on the Brunswick Tower at Windsor Castle.

Although the shield was partially burnt on of the outside, particularly the edges the rest of the shield was relatively intact, small traces of the original paintwork of the Knights coat of Arms can still seen in places and the shield itself was otherwise in remarkably good condition considering it was in an intense raging fire for so long.  Ian said when he was carving the scene, the Scots pine it was thought was originally used to make this particular shield was so old and totally dried out from the heat of the flames, when he was trying to carve the scene "it was like trying to carve a 'rich tea' biscuit" 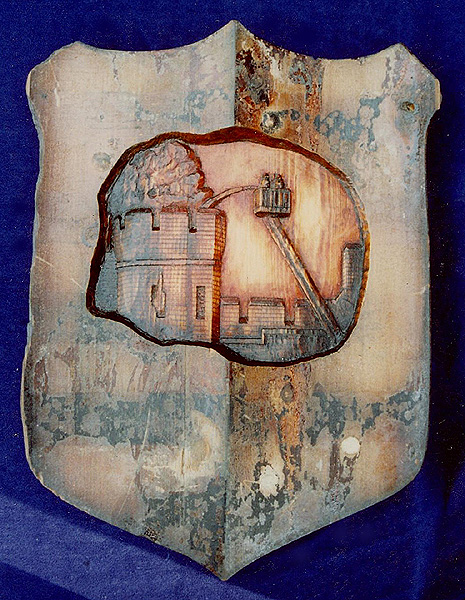 Fire-fighters at the Brunswick Tower