The various stages of carving a life size Bald Eagle in Flight sculpture; from within the fork of  150 year old lime tree; 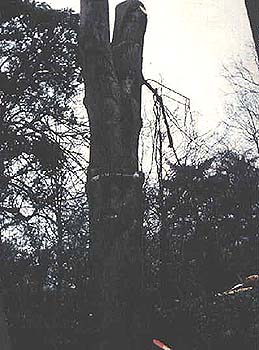 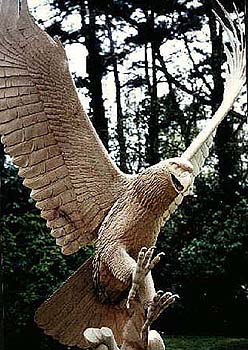 The Bald Eagle sculpture in kit form     -      The completed ten feet high sculpture
"When I first started woodcarving in 1984 I had only been carving small 'table top' size wood sculptures from a single piece of wood, however a few years later storm winds blew down a number of  large trees near my studio in Southern England which were then given to me by the local council, suddenly I now had an opportunity of working on something much larger, a life size sculpture of a bald eagle in flight.
Because the particular lime tree was far too heavy to try and move into my studio, I had no option but to spend the next week on site working on the sculpture  where the tree fell in the park. When I plan a carving I usually not only research the subject, using live studies whenever possible but also use video and text books until I have built up in mind  the finished sculpture. It was then simply a case of cutting everything away that didn't look like a bald eagle. 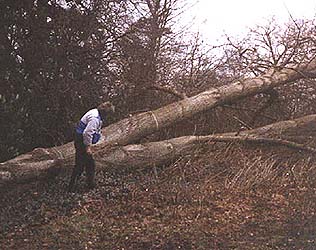 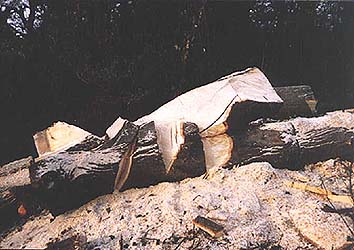 The first hours work on something this large is usually the most critical, and it is very tempting to cut great lumps out of the tree with the chainsaw to try and speed up the process especially working outside in freezing conditions during mid-winter . I would often spend a few hours closely studying every part of the tree until I can almost literally see the finished sculpture hidden deep within the trunk waiting to be released.  I try to resist the temptation to commit myself to a particular pose the sculpture will take too early which would then restricts freedom to make changes in the design just in case a flaw in the timber, or some long lost wire fencing now deep down in the trunk suddenly appears. 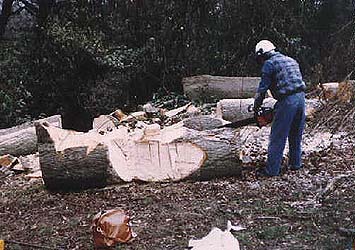 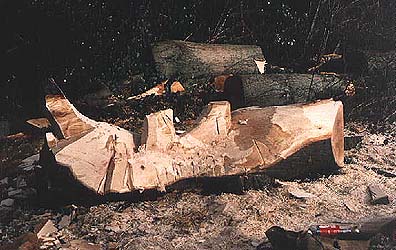 As I did not have lifting equipment the tremendous weight of the tree made it impossible to move the log around on my own working on the sculpture. On the third day I had done as much as I could working on top of the log, I now needed help to turn the log over, however working outside in an open park area does have its advantages with people walking strolling through the park often walking their dogs. I just waited until a couple of rather strong looking men appeared who would casually wonder over to see what all the noise I was making with the chainsaw was about. I then asked if they could kindly give me a hand with turning the tree over, which fortunately they initially were quite happy to do. After almost half an hour of strenuous work between the three of us tying to lift the log we managed to over roll it over, with the end the wings requiring a turning circle of almost ten feet that was no mean feat. With a crash the log finally went over and after thanking the two now exhausted men, work on the other side of the eagle sculpture could finally be started. Although I spent a further two days working on the sculpture in the park, I never saw those two men again, strange that!. 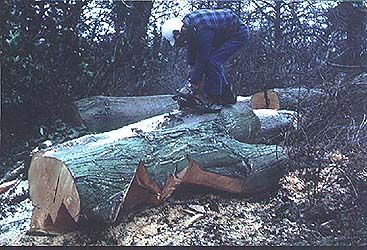 It took five days of many trials and tribulations before I had finally reduced the weight of the log sufficiently enough to be able to put the eagle sculpture in the back of my estate car ( station wagon) and take it home, before it came to its temporary rest in my back garden for the next few months. Its was then covered with a tarpaulin on the top to allow the wood to air dry circulate underneath. As the timber was still far too wet, I obviously couldn't bring it in to the heated studio until the moisture content had been reduced. 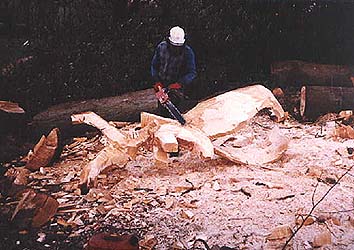 Very careful observation of the wood as it was drying out at this stage was vital. I  concentrated on the head and body first as this area has the bulk of the wood  and would therefore take the longest to dry out, leaving the tip of the beak and claws until last to avoid any accidental damage. Once the shape of the head and feet were defined they were left alone so I could concentrate on carving the wings. I decided right from the outset I wanted the flight feathers to be realistic and carved to the thickness of real eagle feathers, the wings were also to have a slight curve in the ends to reduce any potential problem with the thin feathers and end grain of the timber. 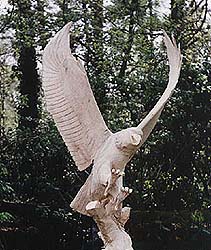 The time had now come to try and stand the sculpture up on to its own base for the first time. It was an anxious moment, as I would at last find out whether I had managed to achieve the correct perspective from a distance and whether it would indeed stand up on its own. Remarkably it stood there quite happily and it didn't look too bad, once I removed twelve inches from the height of the sculptures base. 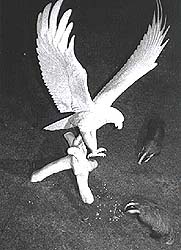 As I was attempting to achieve a life like appearance of a Bald eagle their most noticeable feature is of course the white head and tail feathers, it was therefore necessary for me to stain and bleach the wood accordingly. In an ideal world I would have left the sculpture exactly as it was carved from the tree, with no finish on the sculpture at all just the bleached wood finish, however on this occasion it was stained and bleached and finished with a wood sealant. 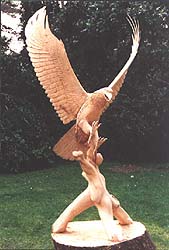 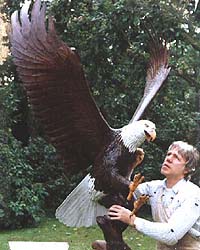 The equivalent of around five months continues work

There is now a possibility that by using this completed unique bald eagle in flight sculpture as a 'master copy' a world wide limited edition of nine of these bald eagle sculptures will shortly be produced cast in bronze.