The Order of the Bath consists of the Sovereign (The Queen), the Great Master (The Prince of Wales) and three classes of members. The title of the Order is late medieval in origin and arose from the ritual washing (inspired by the washing of baptism), a symbol of spiritual purification, which formed part of a knight's preparations for the conferment of knighthood.

Due to the limited number of stalls (seats) available in Henry VII Chapel only the most senior Knights Grand Cross can be installed. Nine new Knights Grand Cross of the Most Honourable Order of the Bath (GCB) were installed at Westminster Abbey by HRH The Prince of Wales on Tuesday 25 May 2010 and took place in the Abbey's Lady Chapel - which is also the Chapel of the Order of the Bath, of which the Prince of Wales is the Great Master.

Shown below are all of the Knights of the Bath Crests that have been placed in Henry VII Chapel, the Lady Chapel in Westminster Abbey from between 1989 and 2011 for the Knights Grand Cross of the Most Honourable Order of the Bath.

Sculptor and woodcarver Ian G Brennan has been commissioned to produce all of the Knight of the Bath Crests during this period. The crests have mostly been carved from lime wood prior to being painted and are between 10 - 24 inches high, each Knights Crest can take Ian  between three and five weeks to complete.

The Crest's of Sir David Williams, at the stage of the woodcarving prior to painting and gilding.

Many of the Knights of the Bath Crests created by Ian G Brennan now placed in position upon the Knights helmets in Henry V11; Lady Chapel in Westminster Abbey

Crests were originally worn on top of the Knights helm (helmet) during pageants and tournaments in the thirteen and fourteenth century and are used as a form of identification.  Each carved Crest is placed upon a wreath, which is also carved from wood to represent a circle of two twisted ropes of silk each of a different colour. The purpose of the wreath was to disguise the join between the helm and the Crest.

Although each Knight of the Bath and Garter Crest Ian produces when displayed in Henry V11 Chapel in Westminster Abbey and St George’s Chapel in Windsor Castle are only viewed from the front and sides and over the centuries Ian like his predecessors were not required to carve the Crests from the back. 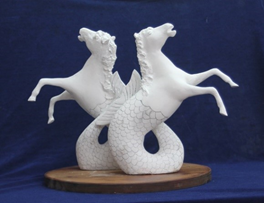 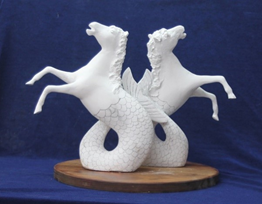 However, for the past thirty plus years when practicable Ian has carved, painted and gilded the Crests from all sides as can be seen with the ‘sea horses’ Crest. 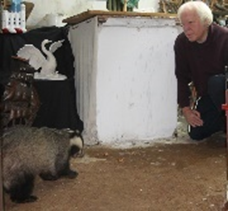 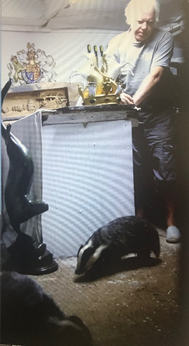 Often when Ian is working into the night to complete a particular commission, local wildlife often arrives to join him in his studio. On this occasion a pair of badgers caught on the security camera, wandered in whilst he was working on the 'sea horses' Crest.

Often several different Garter and Bath Crests are being created in three dimensions at the same time. 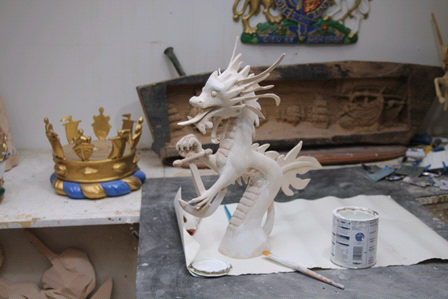 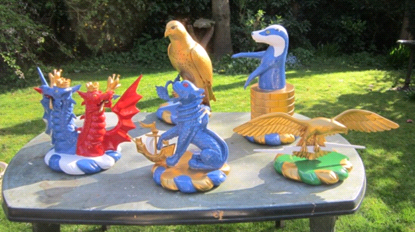 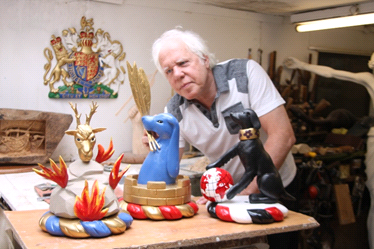 The Crest of Sir Frank Cooper prior to painting and gilding.