Lord Nelson’s ‘Life Mask’: This plaster copy of  Nelson's ‘life mask’ has been set upon a piece of original oak from Victory’s orlop deck where Lord Nelson was taken having been hit by a musket ball from a sniper high up in the rigging the French Flagship during the Battle of Trafalgar. 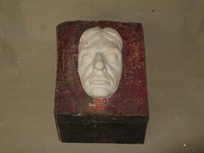 An original French musket ball similar to the calibre shot that felled Nelson has been attached to the piece of oak from the orlop deck, was one of six found together in the muds at Rotherhithe alongside one of the French gun-carriages. One of these French gun carriages also recovered from the mud was then taken to the Mary Rose museum Portsmouth.

These musket balls and gun carriages have been confirmed to be from one of the few Trafalgar prizes, survivors of the ‘great storm’ following the battle, then towed to Rotherhithe for salvage. 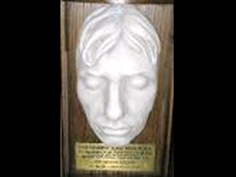 A similar plaster copy of ‘Nelson’s Life mask’ shown below can be found today alongside the bar in the Officer’s Mess on the middle gun deck of HMS Victory. 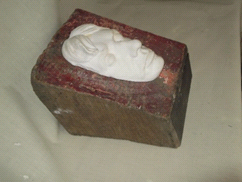 This slopped shaped oak strip of decking joining the deck and side of the ship (shown below) was replaced during the restoration program on the Victory.

Edited information regarding the red painted oak on the orlop deck, taken from the web.

“On the Orlop deck lay Nelson, shot and dying in the red-painted officer’s surgeon quarters. It is a myth that this deck was painted red so sailors couldn’t see their own blood. Red lead paint could deal with damp conditions as this deck was situated below the waterline. Curved red pigment pieces, deemed to come from only a few feet away from our dying hero, as a hazardous beam in these quarters had been softened to a slope for comfort as they sat with their backs resting against the ships sides on the wooden deck in these perilous environs where a surgeon often wielded his operating knife.” 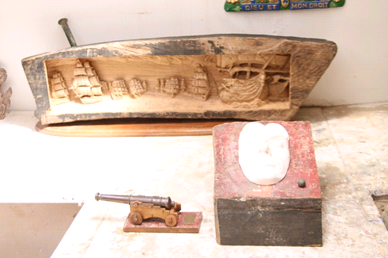