An outline image of Diana the Princess of Wales to be painted in oils on the reverse of the Princess's oak garden bench. 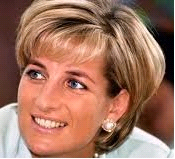 Painting a hint of the image of Diana, blending onto the oak garden seat. Painting oils on wood, a technique first used by for Buddest paintings between the fifth and tenth centuries and later in the equally iconic image of the Monna Lisa, painted in oils by Leonard da Vinci on a poplar wood panel during the Renaissance.

The Prince and Princes of Wales garden bench had for over a decade been kept in the private walled garden in Kensington Palace. This particular oak bench was present to the Royal couple when they married carved from underneath the benches seat, the original  oak seat was replaced by Ian during its restoration in 2000.

The idea in restoring the garden bench was to try and retain as much of the original bench as possible particularly the relief carving in the back of the bench which Ian had managed to do. The condition of the oak underneath the oak arms and seat was in perfect condition, but on top of the seat after many years of being attacked by the sun and rain along with general wear and tear on what was obviously a favourite place to sit in the garden at Kensington palace, had taken its toll. 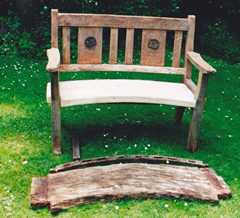 The worn top of the original oak seat and the sound oak underneath.(50 inches long)

The only major sections of the bench which required replacing was the well-worn 2 inches’ thick seat and the arms, although on the back of the seat the oak was in good enough condition to paint an image of the Princess upon it.

The oak bench before and after restoration